Join us on Saturday 18th May at the Anthony Burgess Centre, Manchester. Derek Blyth will present a Study Day on Eine Heldenninleben – A Heroine’s Life – Brünnhilde in ‘The Ring’.

There is no disputing the fact the Siegfried is the hero at the centre of ‘Der Ring des Nibelungen’, indeed, Wagner started by developing a work called ‘Siegfrieds Tod’ and only later expanded it into what we know as ‘The Ring’. If we wanted to name a protagonist for ‘The Ring’, we would probably choose Wotan, with Alberich as the antagonist (‘though a good case could be made for this being reversed).  Today, however, we will examine the events through a different pair of eyes, those of Brünnhilde, the heroine of ‘The Ring’.

Come, prepared to be thrilled, shocked, surprised, and, I hope, overjoyed by our journey together which will include many musical and visual examples of a range of performers of this wonderful rôle.

My apologies to Richard Strauss for having misappropriated his title.

Timetable for the day:-

13.00 Lunch (not provided but the centre does excellent soup/sandwiches)

Cost: Members £20, Non-members £25, Students £10.  This is a specially reduced rate for this event only. Please contact the secretary to book. 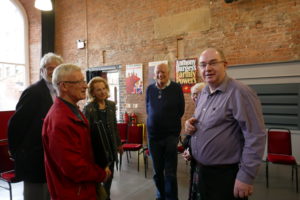 Derek, on the right, chatting to some of the attendees.

Derek Blyth gave a splendidly lively and illuminating talk on Saturday 18th May at the Anthony Burgess Centre, Manchester, a Society Study Day entitled Eine Heldenninleben – A Heroine’s Life – Brünnhilde in ‘The Ring’.

Derek’s relaxed and friendly presentation – totally without PowerPoint! – was effective because:

A particular insight for me from the talk was a further understanding of the exact nature of Brunnhilde’s transgression in Die Walkure – although obviously part of it is her simple refusal to carry out Wotan’s command, a more specific point, which I had never fully appreciated before, was that, rather than riding back to Valhalla with a dead hero at the end of Act 2, she was riding away from it with a live woman – arguably this complete reversal of her normal role sparked particular anger in Wotan…..

Altogether it was a real thrill to be able to sit back and hear quite a lot of the story of the Ring, and some of its greatest music, in the company of fellow Wagnerians and a knowledgeable guide. Sadly I shall miss Derek’s talk in September to the Society about Alberich – I thoroughly recommend it if you are able to make it.

Up-to-date news about our events, any last-minute changes to arrangements, information about Wagner performances and events worldwide and links to items on the web of interest to Wagnerians worldwide, especially videos of productions.